EU Funding under the Recovery and Resilience Facility for Cyprus

EU Funding under the Recovery and Resilience Facility, for Cyprus

Ambitious reforms and investments for a sustainable and competitive economy are shaping Cyprus’ Recovery Plan. Digitization and energy projects are coming into focus.

In July 2021, the European Commission decided to provide funding for Cyprus Recovery and Resilience Plan, worth €1.23 billion. The Cyprus reforms and public investment projects are to be supported from the EU recovery and resilience facility. The funds consist of €1 billion in grants and €223 million in loans. A further €1.4 billion in private capital and bank loans are to be mobilized for the implementation of the projects. The planned total investment amounts to around €2.6 billion, almost 10 percent of the GDP of Cyprus.

The Directorate-General for European Programs, Coordination and Development is the point of contact for information on the Recovery and Resilience Facility in cooperation with the Cyprus Ministry of Finance. 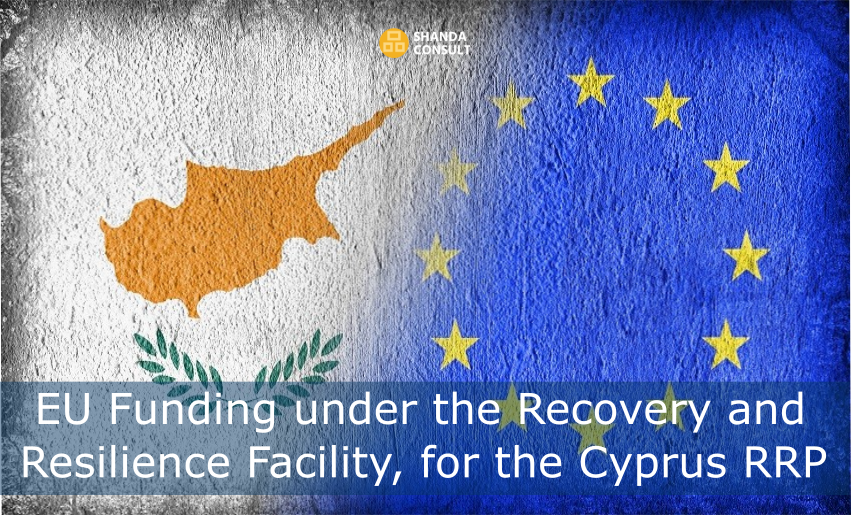 Focus on energy efficiency and renewable energies
Around 41 percent of the funds from the European Union’s reconstruction fund are earmarked for energy-related projects. These include projects to save energy for companies, municipalities and private houses, the expansion of renewable energy systems, the installation of smart measuring systems (smart meters) and charging stations for electric cars. Plans to promote energy storage are also on the agenda. In order to produce the equipment for the projects on site, cooperation between Cypriot and foreign companies, research centres and universities is to be promoted within the framework of an ecological industrial and techno park.

The interconnection of the electricity grids of Israel, Cyprus and Greece is planned with EuroAsia Interconnector. The submarine cable connection is supported with €100 million from the fund. The project aims to relieve the island’s dependence on oil imports for electricity generation.

Digitization is a top priority
The Cypriot government plans to invest around €90 million in the digitization of public administration and the expansion of 5G and fiber optic networks. The installation of underwater fiber cables is also planned by the end of 2025 to connect Cyprus and Greece. Projects in the field of information and communication technology (ICT) are planned across all sectors. This includes smart cities, e-health and the smart management of water resources. A special fund (Equity Fund) from public money is intended to support start-ups in a targeted manner.

Business opportunities for German companies
It is often difficult for small Cypriot companies to find investors as they often have little equity. Cooperation with well-funded Cypriot or foreign companies is necessary. Therefore, takeovers and mergers as well as the transfer of know-how are desired and should be promoted in a targeted manner. Cypriot food or beverage manufacturers could be of interest for German companies. Suppliers who offer equipment for medical technology, photovoltaics or wind energy also have good business opportunities, especially with regard to cooperation with the planned industrial and techno park.

Improvement of the national health system
The Cypriot government plans to invest around €74 million in health care. Around €50 million are to flow into the construction and modernization of the hospitals and the purchase of medical equipment. There are also plans to develop an ICT system for public health. Furthermore, digitization in the healthcare system is to be promoted and a public early warning system via mobile phone notification, television and social media is to be developed.

Cyprus is paving the way for electromobility
The government will subsidize the purchase of electric cars with €24 million. A further €13.6 million will flow into the infrastructure. In particular, fast charging stations in public buildings, private houses and companies as well as the use of electricity from renewable energy sources are promoted. First, however, the legal framework for electromobility must be created.

Expansion of the food industry
In order to promote Cypriot food and beverage exports more strongly, an internet platform for the identification and quality assurance of national products is to be created. Cypriot food companies are offered advisory services to strengthen export promotion. A separate strategy is being developed for the export of Halloumi.

Small and medium-sized companies that process or sell agricultural products are subsidized with around 25 million euros in order to modernize their businesses and introduce digital solutions. A total of 7 million euros is available for large industrial companies. In addition, aquaculture facilities are to be built in Pentakomo and Vassiliko.

A modern state is to be created
Numerous reforms are intended to make the state apparatus more efficient and improve the investment climate. To this end, a new law is planned that will encourage strategic investments. This speeds up judicial procedures and the process of setting up foreign companies. The fight against corruption is also addressed. As a burned child, Cyprus wants to create a new legal framework for crisis management in financial institutions.

Key elements of the Cyprus Recovery and Resilience Plan 2021-2026

The strategic aim of the RRP is to strengthen the economy’s resilience and the country’s
potential for economically, socially and environmentally sustainable long-term growth and
welfare. The RRP has been established around five policy axes:

Each policy axis contains appropriate country-specific investments and reforms that take into account the need to mitigate the economic and social impacts of the COVID-19 crisis, as well as the need to strengthen the economy’s resilience and transformation through a robust new growth model that will contribute to improving the economy’s resilience, sustainability, and efficiency, as well as the Union’s goals for green and digital transitions.

The RRP is an important instrument to repair, restart, and reconfigure the economic and social composition of Cyprus to impact the well-being of citizens, the quality of human capital and the labour force, the efficiency of its institutions and the Country’s effective green and digital transition.

There is a need for cultural resilience in public administration, private sector as well as citizens in Cyprus, in order to reach the goals of the RRP.

Through the measures of the RRP, the aim is to promote Cyprus as:

A long-term economic strategy being prepared on behalf of the Cyprus Economic and Competitiveness Council, filtered by the European Commission’s guidelines under the EU Recovery and Resilience Facility, aiming to formulate and implement a new ambitious, long-term strategy and growth model, in order to fulfil the vision of transforming Cyprus into an international model based on a thriving and prosperous economy, with a high level of competitiveness, increased productivity and export orientation, at the same time encompassing a fair and inclusive society.

In line with this vision, the RRP includes reforms and investments under the above mentioned five policy axes and their components, in total 13 reforms and investments of €1.2 billion.
It is anticipated that roughly 41% of the Plan contributes to the green transition and around 23% to digital transformation through a number of targeted actions with a green and/or digital dimension across nearly all policy axes.

The positive effects of the RRP on growth are expected to be largely maintained in the long run. GDP levels are expected to be 16.5% higher 20 years ahead (i.e. in 2041), compared to a scenario without the implementation of the RRP, if all reforms expected in the Recovery and Resilience Plan are realised. 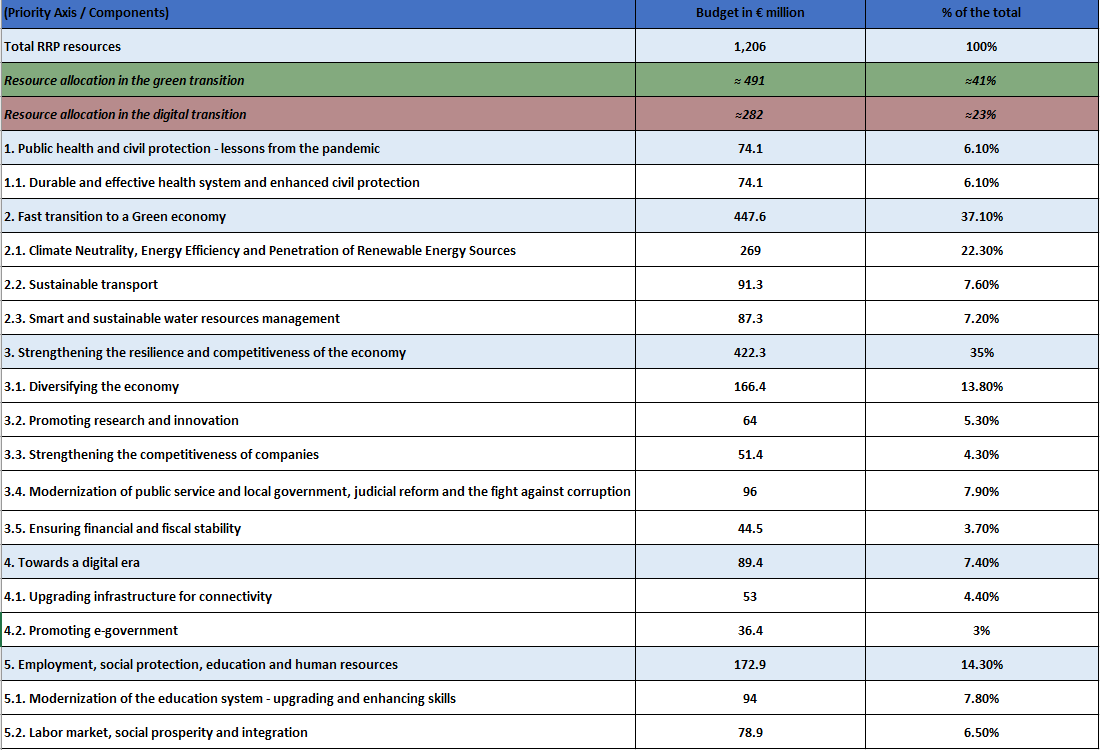 Please feel free to contact us through below contact form for a first complementary personal consultation via phone or, preferably, via Zoom video conference.