FDI and Business Environment in Iran

Despite its challenges, Iran is an interesting country to invest in with lots of opportunities and market chances locally and in the region. There are many areas in services and production that are far from saturation. Especially smaller foreign investors continue profitable operations in Iran.

Foreign Direct Investment into Iran is now effected by the US‘ withdrawal from the Nuclear Agreement. The US reinstated its sanctions and will put in action additional sanctions starting 5 November 2018.

Foreign Direct investment (FDI) is not only affected by the new uncertainty, but also by the sometimes-challenging business environment in Iran. 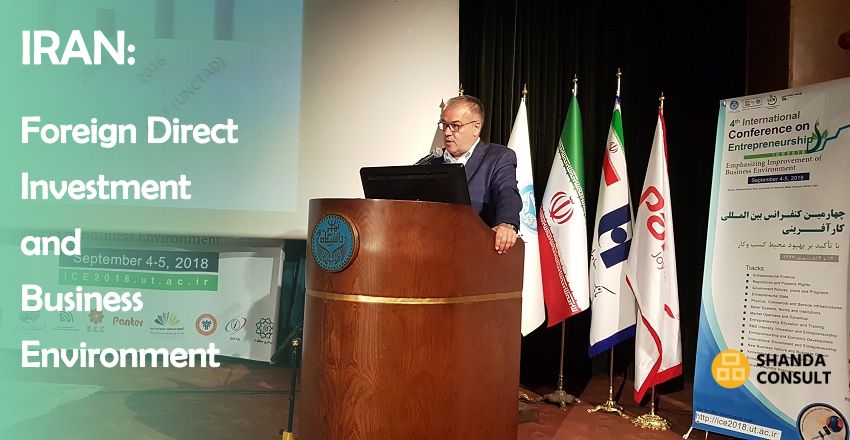 The 4th International Conference on Entrepreneurship in Tehran, ICE 2018

The Faculty for Entrepreneurship of the University of Tehran organised its 4th International Conference on Entrepreneurship on 4th and 5th of September 2018. The Managing Director of Shanda Consult was kindly invited to lecture about “Foreign Direct Investment and Business Environment” in Iran. The following is an abstract of this lecture.

The economy of Iran in general and Iranian businesses in particular have struggled from the international sanctions since long years. Necessary raw materials and spare parts for many industries could not be imported, leading to deficiencies in many sectors and affecting not only further development but also creating safety issues in transport systems (old and badly maintained planes, railway systems and wagons, the car industry etc.)

The “good in the bad” was that Iran had to focus on own resources, research and development and education. Some industries benefited from this situation and are today working with high technology and efficiently. The pharmaceutical industry and Nano-technology in general are just two examples. High-tech producers can be found in many regions of Iran, not only in Yazd, where a very advanced high-tech industrial zone has been established decades ago.

Foreign Direct Investment influx into Iran continued during the years of international sanctions on a low level, reaching its peak in 2011: 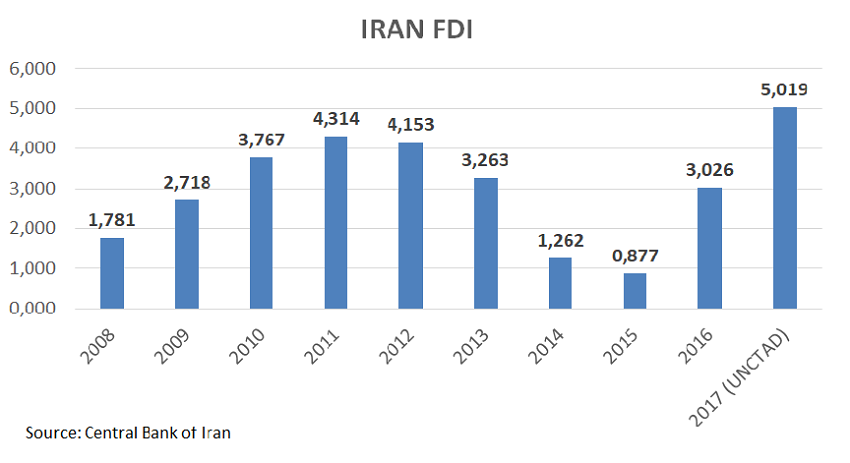 While the above annual FDI from 2008 to 2016 were published by the Central Bank of Iran, the estimated Foreign Direct Investment into Iran in 2017 is an estimation of the United Nations Conference on Trade and Development, UNVCTAD.

The Nuclear Agreement, correctly the “Joint Comprehensive Plan of Action” (JCPOA) was signed on 14 July 2015 between the Iran, the US, the UK, France, China, Russia and Germany. The agreed lifted of sanctions was implemented on 16 January 2016.

Business people and company representatives mainly from Europe but also from many other countries started to visit Iran, mostly in form of organised business delegations, to identify business and investment opportunities. As the above graphic shows, it (naturally) took a while until Foreign Direct Investment into Iran picked again. Globally operating companies were the first to enter Iran with investments.

However, the lack of clarity regarding its stance towards the implementation of lifted sanctions by the US, despite being signatory of the Joint Comprehensive Plan of Action (JCPOA), plus the continuation of the US’ own sanctions and consequently US penalties applied to some banks and companies, made many companies from Europe and other countries refraining from investing in Iran.

Today, those foreign companies from Western countries that invested in Iran are working to fulfil their obligations from current investment contracts but refrain from signing new contracts for already negotiated and planned investments.

This situation leaves Iran as a market and a destination for investments to mainly Russian and Chinese companies, which are rapidly gaining ground in Iran and establishing strongholds, leading to more influence – economically and politically – in the Islamic Republic of Iran. With the withdrawal of the US from the nuclear agreement and with the lack of successfully established banking facilities between Iran and Europe, the Western world is losing influence in Iran – a fact that contradicts the actual goals of the Western world.

Foreign Direct Investment into Iran and into Turkey

The Islamic Republic of Iran and the Republic of Turkey are quite similar in many aspects. The population of both countries has about the same size. Culture, traditions and habits are quite similar, to the extend of similar figures of speech. About 40 % of the Iranian population are Azeri, easing communication between people from the two countries. Both countries are relatively powerful and are striving for more influence in the region. The development of the two countries and their economy and markets is quite comparable as well.

Therefore, a comparative graphic of Foreign Direct Investment into Iran and into Turkey provides an idea of the level of what FDI into Iran could be, should the conditions normalise: 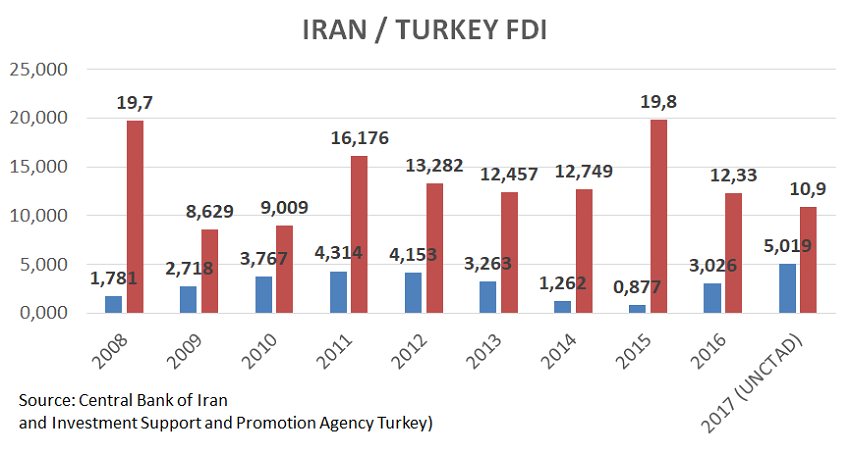 As reflected by the above chart, there is a lot of potential for Foreign Direct Investment into Iran, based on its national and regional market size, its natural and human resources and its intellectual potential.

Difficulties for investments in Iran are, however, not only foreign influences. Iran is a country with remarkable opportunities, but it is not an easy country to do business. 40 years of isolation, partly chosen by the governments of Iran and partly introduced by the world, did indeed leave its traces.

Compared with the world in general, where business practices and methods witnessed tremendous developments during the last four decades, companies as well as administrative and governmental bodies are often sticking to antiquated methods and procedures. Additionally, the scarcity of possibilities and opportunities, and of funds and sources of income, created a culture of corruption and participation on the profit of others.

There are of course many ways and angles to evaluate a prospective investment market, and methods of evaluation need to be formulated as per a specific investor’s needs and industry.

The PESTLE factors are on way to analyse and to evaluate a market. PESTLE is the abbreviation of Political, Economic, Social, Technological, Legal and Environmental factors that influence or may influence an investment and its success.

Iran is an interesting and, on the medium term, promising country to invest in. However, being a country in transition, investing in Iran may face some challenges, mainly:

Despite its challenges, Iran is an interesting country to invest in with lots of opportunities and market chances locally and in the region. There are many areas in services and production that are far from saturation. Especially smaller foreign investors continue profitable operations in Iran.

Shanda Consult will be happy to share its Iran experiences and to assist interested (prospective) foreign investors through its well established and resilient local network. Please do not hesitate to contact us directly through the form below.