Lebanon’s industrial sector is currently going through some drastic changes in order save the country’s industry, jobs and economy. During the course of 2018, the Ministry of Industry (MOI) issued a total of 476 industrial permits during the first half year only. The permits are applicable to both already existent businesses but also for new establishment licenses, expansion projects, exploitation and renewals. 139 licenses were issued for new factories. To date, a number of factories were operating without licenses so the shift towards actually licensing their business is definitely a “good sign”, as Dany Gedeon, Director General of the Ministry puts it. 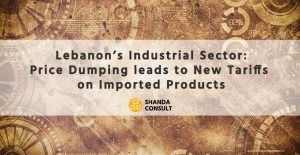 At the same time, the MOI closed down 79 illegally operating factories, that is without adequate licenses. Only 38 of the 117 factories to get licenses actually complied with new licensing requirements. Fadi Gemayal, Chairman of the Association of Industrialists reconfirms this in a statement, “we support the ministry in the decision taken to close illegal factories. We are against the illegal economy.”

Another problem that the ministry is facing is that of environmental pollution and the therewith associated compliance which are still being violated by at least 72 of the 261 licensed factories that have been warned accordingly for polluting the Litani River. Non-compliance may result in risk of closure.

Coupled with unlicensed factories, the industry additionally faces closure due to dumping and smuggling as was announced by the Association of Lebanese Industrialists (ALI), Chairman – Fadi Gemayal. In order to combat this problem ALI has initially given the government 100 days (as at end March, 2019) to take adequate measures in order to save the industry, which to include:

As a result, end of May the Cabinet decided to impose a 10% import tax on 20 imported products. The decision will only come into effect in the Official Gazette, however, this is a very positive step in the right direction for the industrial sector. These 20 products are those that are entering Lebanon in huge amounts and at prices lower than local production costs such as flour, dairy products, detergents, leather products, bulgur, electrical machinery, clothes, biscuits, marble, etc…

Initially, this 10% tax will be effective for the next five years.

The Cabinet has further approved a 2% import tax on all imported products excluding pharmaceuticals, electric cars, and raw materials for industrial and agricultural production. This will remain effective until 2022 provided the Parliament incorporates this in the law, which is mandatory, following the approval of budget.

“The taxes and fees imposed on the imported products will leave positive impacts on the industrial sector,” said Fadi Gemayel, Chairman of the Association of Industrialists.

These measures will hopefully help to reduce the deficit in trade balance and motivate the industrialists to invest and resume their operations.

Lebanon’s biggest competitors in terms of manufactured products are Turkey and China which accounted for imports worth $20 billion in 2018 alone whilst exports only summed up to about $140 million.