The Biogas Market of Ukraine

The Biogas Market of Ukraine and its Potential – A Brief Introduction

Ukraine is highly depending on the import of fossil-fuel energy reserves like, oil, gas and coal. The National Renewable Energy Action Plan until 2020 and further measures until 2030 focus on diversifying the country’s energy mix and strengthening local production of renewable energies, including the production of biogas. Attractive Feed-In Tariffs aim to attract local and foreign investors. 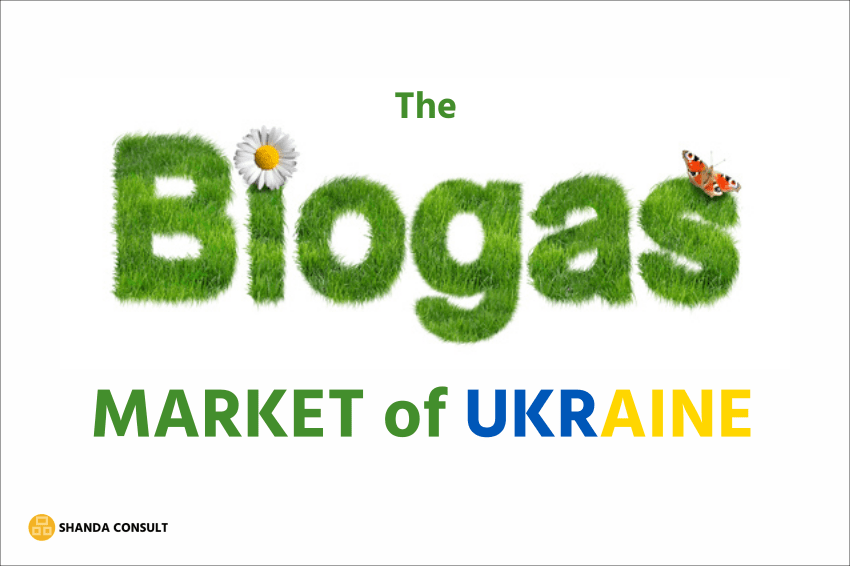 A short introduction of biogas

For those readers who are not familiar yet with the advantages of biogas production from various organic materials, we provide a brief overview following.

Biogas is a renewable energy source.

Biogas itself is mainly used to produce electricity, heat, and, after further refining, as a substitute of natural gas (in the form of bio-methane). Organic fertilisers are a possible by-product of biogas plants.

But the positive effects of biogas production are not limited to its nature as one of the forms of renewable energy! The production of biogas has a very important impact on environmental issues, like, for example, the problem of manure disposal of livestock farms.

The production of biogas helps:

The situation of the energy markets in Ukraine

The re-shaping of the energy markets of Ukraine is one of the country’s most important and most necessary reforms. As a former republic of the USSR, the independent Ukraine was still highly depending on energy and energy reserves from Russia, importing, for example, 70 % of its gas from its neighbour. Cutting gas imports from Russia was crucial though, to further political independence from Russia. Since 25 November 2015, Ukraine does not import any gas from Russia anymore – the current government under President Petro Porochenko did succeed freeing the country from Russian gas dependency.

Reforming and reshaping the Ukrainian energy markets is inevitable to secure energy supplies today and in the future. Ukraine’s dependency on imports of energy reserves needs to be decreased dramatically to save financial resources, desperately needed in the country to finance further reforms.

Ukraine is lucky though. With its geographical size of 603.550 m², Ukraine has a lot of land available for wind power and photo voltaic plants.  Ukraine comprises around 25 % of the world’s chernozem (rich black soil), and with its population of more than 42 million people, Ukraine has an enormous potential for agricultural production. There is hardly any other country in Europe with Ukraine’s potential to produce renewable energy. As per the calculations of the Institute of Renewable Energy of the National Academy of Sciences, the technically available energy potential of renewable energy sources in Ukraine is about 50 % of the country’ overall energy consumption.

The National Renewable Energy Action Plan until 2020 of Ukraine, incentives

The Council of Ministers of Ukraine adopted a National Renewable Energy Action Plan until 2020 (NREAP), in form of an executive order on 1st October 2014. NREAP provides goals for 2020 and projections for until 2030. NREAP provides for incentives until 2030. End-user renewable energy consumption is planned to have a share of 11 % in 2020.

As per the National Renewable Energy Action Plan until 2020, several incentives are envisaged. However, some of them were clipped by the Tax Code of Ukraine from end of 2014.

The remaining incentives are:

In addition to the aforementioned incentives, the Law of Ukraine on Electric Power Engineering provides for very attractive feed-in tariffs, called “Green Tariff” (“GT”) in Ukraine, since 2010:

Private households are also benefiting from the feed-in tariffs in case of wind and solar energy produced (EUR 0,19/kWh for photo voltaic and EUR 0,1163/kWh for wind turbines), provided the installed capacity does not exceed 30 kW.

The current mix of renewable energies, both installed capacity and energy generated, are shown below: 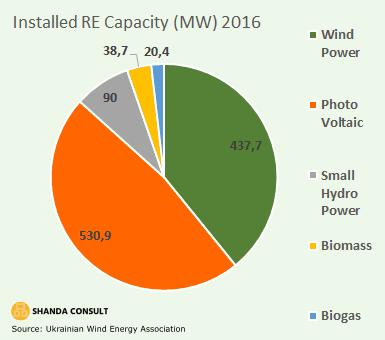 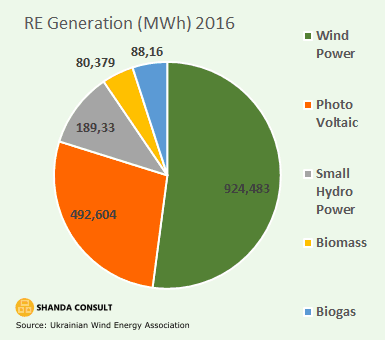 The current biogas market of Ukraine

Despite the enormous potential of biogas-to-electricity in Ukraine, the market is not well developed yet. There are currently about 10 larger electricity-producing biogas plants in Ukraine, with a total installed capacity of 35 MW (end of 2016). Some of them are:

The potential of the biogas market in Ukraine

However, considering the really huge potential for biogas and biogas-to-energy production in Ukraine, there is a bright future for the sector in the country, now also supported by a growing awareness of the agricultural sector for the manifold benefits of biogas plants and biogas as fuel.

Under conservative considerations, the State Agency on Energy Efficiency and Energy Saving of Ukraine sees a potential for biogas plants in the agricultural sector alone of around 5.000 plants with an average installed capacity of 3 MW per plant. These plants could cover 5,7% of the energy consumption of Ukraine.

Not included in the estimation of the State Agency on Energy Efficiency and Energy Saving of Ukraine is the potential for biogas plants related to urban waste deposits (landfill), water (sewage) treatment and the food industry.

Technically, Ukraine has the potential to produce up to 10% of its energy consumption from biogas alone!

The government of Ukraine works hard to attract foreign investment in biogas production, calling for a total investment of around 15,5 Mio Euro.

The enormous potential for biogas production in Ukraine raises the interest of biogas planning and construction companies and investors from many countries, including Chinese power companies. Currently (summer 2017), Shandong Qingneng evaluates the establishment of a biogas plant in West Ukraine, and Xi’an ShaanGu Power plans to build a biogas-to-electricity plant on the region of Zhytomyr with an installed capacity of 6,7 MW.

Viability of biogas plant sizes in Ukraine, for the production of electricity

The size categorisation of biogas-to-electricity plants in Ukraine is defined as following:

Feed-in-tariffs (FIT) play a key role in the development of a country’s biogas market.

However, from 01.01.2017 onwards, Germany’s FIT for electricity from the production of new biogas plants is as following:

However, the usage of minimum 30 % or 50 % locally produced equipment results in an increase of 5 % and 10 % respectively, of the FIT.

The production of electricity from biogas on small plants (up to 300 kW) is currently not viable in Ukraine. Small biogas plants in Ukraine make only sense for heating and domestic use of gas.

The viability of medium-size biogas plants in Ukraine (300 – 1000 kW) for profitable production of electricity is questionable. Biogas-to-electricity plants with an installed capacity of minimum 500 to 600 kW may justify their investment if they operate with high capacity utilisation, and if a relatively high percentage of local equipment has been used during a plant’s establishment.

The above evaluations do of course not consider the values of positive side effects like protection of environment, solution for waste disposals, etc. Those values are, unfortunately, not yet of material value.

Production of biogas for heat by biogas plants in Ukraine

The market and consumer customs as well as the existing infrastructure suggest the production of biofuel (biomethane biogas).

District heating is very common in Ukrainian cities, a relic from the Soviet times. Although the pipeline network for the distribution of heat is in desperate conditions, partly 40 – 50 years old and thus beyond its economic life, the production and distribution of heat, produced from biogas, is an interesting market, which Ukraine tries to address now.

On 21 March 2017, the parliament of Ukraine, the Verhovna Rada, adopted the Draft Law 4334 on stimulation of heat energy production from RES. The law aims to replace (expensive) imported gas with alternative fuels produced in Ukraine from RES. The law has been signed by the President on 11 April 2017.

Once implemented, the law

Some suggestions to better develop the biogas sector of Ukraine

Without any doubt, Ukraine clearly committed to the development of the renewable energy sector, a decision also driven by the need for the reduction of dependences from Russia, and from other imports.

However, as often, the details play an important role, and unsuitable details may even spoil the best action plan and legislation.

Suggestions to encourage the biogas market of Ukraine:

Since 2002, the Bioenergy Association of Ukraine organises the international “Biomass for Energy” Conference.

This year, in 2017, the conference will take place at the Great Conference Hall of the National Academy of Sciences of Ukraine, on 19 and 20 September. The “Biomass for Energy 2017” Conference is co-sponsored by the Deutsche Gesellschaft für Internationale Zusammenarbeit (GIZ) GmbH.

“Biomass for Energy” is a platform for dialogue between Business and Business (B2B) and Business and Government (B2G). Among the participants, 200 – 250 Ukrainian and international experts are expected to discuss topics related to biomass and biogas production.

Shanda Consult consults and assists investors from Germany, Switzerland, Austria, Cyprus and Lebanon regarding their investment projects in Ukraine and other countries.

Services typically, but not only, take place during the pre-investment-decision and implementation phases, and focus on localisation services, initialisation and facilitation of Joint-Venture Partners from Germany and from Ukraine for investment projects in Ukraine, legitimate political consulting and lobbying, technical and legal assistance in Ukraine.